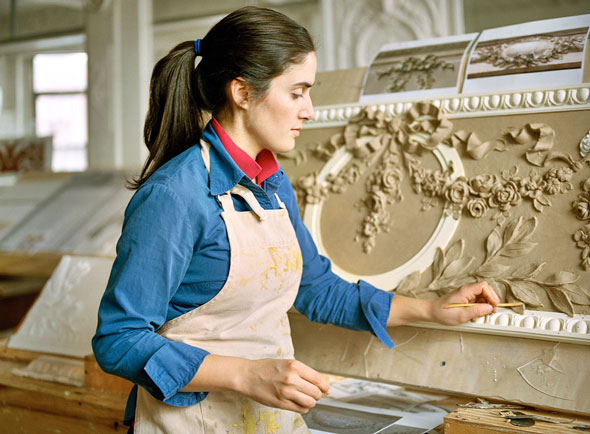 Sculptor Emily Bedard has been named the winner of the first ever Award for Emerging Excellence in the Classical Tradition. Launched in 2017, the Award is a collaboration between the Institute of Classical Architecture & Art (ICAA), the Prince’s Foundation for Building Community (PFBC), and the International Network for Traditional Building, Architecture & Urbanism (INTBAU). Open to applicants from around the world, the Award aims to shine a light on exceptional talent exhibited by one young professional in classical and traditional architecture, landscape and interior design, building crafts, urban design and planning, and the allied arts.

Bedard graduated from Lyme Academy College of Fine Arts with a B.F.A. in Sculpture in 2009. She is currently the Sculpture Director at Foster Reeve Architectural & Ornamental Plaster. In 2015, Bedard was awarded the ICAA’s prestigious Stanford White Award in the “Craftsmanship & Artisanship” category for her Statue of Liberty for Seaside Monument in Bridgeport, CT. Bedard was also honored (along with Hyde Park Mouldings) with a 2016 Bulfinch Award by the ICAA New England Chapter for her plasterwork at the Edward M. Kennedy Institute.

According to Bedard, her work is inspired by sculpture produced during the American Renaissance: “I take the deepest influence from the works of Augustus Saint-Gaudens and Daniel Chester French, and their collaborations with the architects Stanford White and Charles McKim. I wish to emulate their careers in mine, to work alongside classical architects creating environments that uplift and immortalize the human spirit.”

Bedard’s artisanship relies on a thoroughly collaborative approach. “Working with architects, engineers, and craftspeople has expanded my understanding of collaboration,” says Bedard. “The most sophisticated classical structures cannot exist without it.”

“We are honored to work with the Prince’s Foundation for Building Community and INTBAU as we seek to educate and engage the next generation of practitioners,” said ICAA President Peter Lyden.”Emily’s expert craftsmanship brings beauty to our built environment and inspires us all. We are delighted to recognize her achievements with this new and important Award.”

A jury representative said ‘Emily possesses a rare talent of artisanal craft that is exceptional for someone of her age. Her eye for beauty and ability to create transcendental works is truly inspiring. We are delighted that she is the first recipient of this new award.”

Emily Bedard, who was selected by an international jury, will receive the Award on April 30, 2017 at the ICAA’s headquarters in New York City. She will also be acknowledged the following day at the ICAA’s Arthur Ross Awards celebration.

To view a video of the Award ceremony please click here.

About the ICAA
The Institute of Classical Architecture & Art’s mission is to learn from the past to build for the future. The ICAA is the leading nonprofit organisation dedicated to advancing the classical tradition in architecture, urbanism and their allied arts. It does so through education, publication, and advocacy. The Institute is headquartered in New York City with regional chapters across the United States. It offers a wide array of programs that are designed to promote the appreciation and practice of classical and traditional design, including classes, travel, lectures, and conferences. It publishes an academic journal called the Classicist as well as the acclaimed book series called the Classical America Series in Art and Architecture. The ICAA’s Arthur Ross Award annually recognizes and celebrates excellence in the classical tradition internationally. The ICAA was honored to bestow an Arthur Ross Award on HRH The Prince of Wales in the Patronage category in 1990.

About PFBC
The Prince’s Foundation for Building Community evolved from The Institute of Architecture, established by HRH The Prince of Wales. It believes that sustainably planned, built and maintained communities improve the quality of life of everyone who is part of them. They help us live better at a local level, and start dealing with the broader global challenges of urbanisation and climate change.

By 2050, the world’s urban population will almost double to nearly 6.5 billion people. The Prince’s Foundation operates across the globe, building the capacity of the planners, architects, engineers, and communities that will be tasked with supporting a rapidly urbanising world. Its work puts people at the heart of creating resilient places – through community engagement and working with people who know their area best. Through educating future generations of practitioners, pioneering practises, and building places, the Prince’s Foundation endeavours to create sustainable, vibrant communities that leave a legacy for future generations.