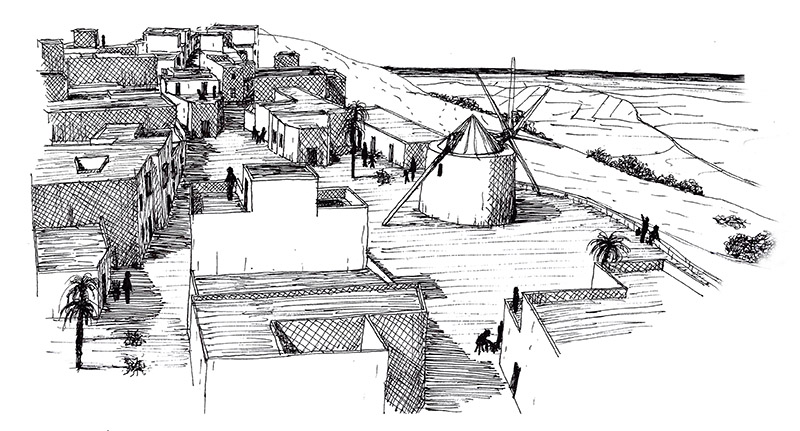 The Richard H. Driehaus Architecture Competition is an international competition created to help preserve and revive the use of local architectural traditions in Spain.

The three Spanish locations selected in the first phase of the Competition were Vejer de la Frontera, in Cádiz, Grajal de Campos in León, and Jaca in Huesca. In its second phase, 78 national and international architecture studios submitted their architectural and urban design proposals to respond to the needs of these towns.

Grajal de Campos is a municipality which is being threatened by its progressive depopulation and the subsequent ruin of many of its buildings. It has, however, a large heritage whose future survival depends on the evolution of its population. The competition aims to recover part of the buildings that once formed its square in order to provide mixed use buildings for social renting. This could attract economic activity and new inhabitants to the town. In addition, it is proposed to recover the Palace of the Counts of Grajal, which could hold, among other uses, a hotel, all contributing to the proposed goal.

The First Prize winning proposal, awarded with €12,000, is a design by Imanol Iparraguirre Barbero and Aritz Díez Oronoz, two young Basque architects. Their project, entitled “Lázaro”, seeks to restore its lost vitality to this beautiful location. The jury praised the respect shown to the history of the location, as well as the choice of designs, construction techniques and the use of local materials, which could generate more and better quality employment among the craftspeople of the region, further enhancing the particular identity of Grajal de Campos. Vejer de la Frontera wanted a solution drawing on the local landscape for the new urban development being planned for the western edge of the town. This town limit is a hill which is crowned by a group of mills of great visual importance, the main view of the town when arriving from Cadiz. It was therefore sought that the winning proposal would serve to guide this expansion, assembling a degraded and underused area, while enhancing at the same time the recognised character of Vejer de la Frontera, with its white volumes scattered on the green hills.

The First Prize winning proposal is a design by Juan Moya Romero and his collaborators Sara Lobón Ruiz, Luis Tovar Timmerman, Víctor Rejón Terrones and Víctor Manuel Jiménez Sánchez, awarded with €12,000.
In their design, they propose an ensemble representing the many qualities of the architectural tradition in Vejer: a compact, stepped complex of whitewashed buildings that extends organically on the foot of the mills, always trying not to challenge the important visual role these mills have played for centuries, defining the skyline of the town. The ambitious project for Jaca contemplated the transformation of the interior of one of the blocks of the old town to create a new Plaza Mayor (Main Square). The construction of this space would revitalize the town while respecting the traditional architecture of the area. The jury, which included the mayor of Jaca, was unable to choose a winning project¸ since unfortunately none of the proposals fulfilled all the conditions established in the competition rules.

Due to the high quality of the other proposals submitted, apart from the winning projects, six projects have received an honorary mention and €2,000.

The jury was composed of representatives from the Ministry of Public Works, the Ministry of Culture, the Higher Council of Architects of Spain, INTBAU, the city councils of the three towns and the Rafael Manzano Prize, who assessed the quality and feasibility of the projects.