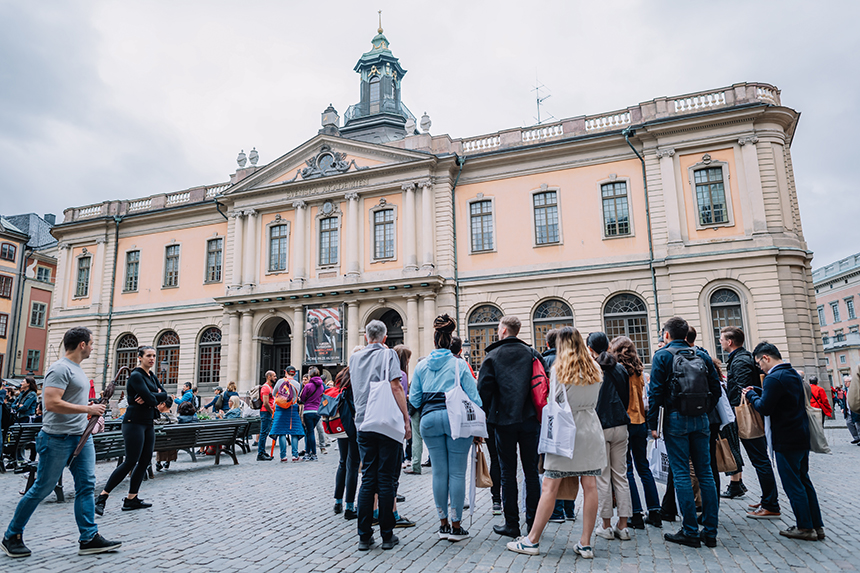 In July, 22 students were selected from over 40 applicants from a variety of professions and backgrounds to take part in the Engelsberg Summer School in Classical Architecture. This marked the fourth consecutive year the course has run in the UNESCO World Heritage Site, near Stockholm. Four of 2019’s students (Jofrid Sandgren Østenstad, T’Leya Walker, Anna Larraine Rienton and Alexander Dowthwaite) have provided feedback which demonstrates the value of this opportunity for young built environment professionals to be able to immerse themselves in the study of the classical tradition.

The month was divided so that the students spent four days in Stockholm studying the internationally-significant intersection of classical and vernacular architectural styles known as ‘Swedish Grace.’ The remaining three weeks in Engelsberg gave the students a grounding in drafting, geometry, shapes and mouldings, through a variety of workshops and lectures which were run by modern practitioners of the classical style. Jenny Bevan and Christopher Liberatos, two practising classical architects from the USA, were vital to the running of the course and were present throughout the month.

Several visiting tutors led different projects and lectured on different subjects throughout the four weeks of the course. For example, the school welcomed George Saumarez-Smith, who taught a class on setting out of mouldings and entasis. The tutors gave presentations which included examples of their own work: something which this year’s students highlighted as being “incredibly inspiring” and a reminder of the direct relevance of classical form to the contemporary design process.

The intimate nature of the course tuition meant that the students received a rigorous and in depth introduction to classicism. However, any intensity was offset by the course’s idyllic setting. The calm Swedish forest surrounding the school has lakes “of perfect bathing temperature”; which more than one of the students cited as a perfect addition to intense study and intellectual discussion.

Anna Larraine Rienton, an architecture student from the Philippines, had nothing but praise to offer about how the course was run. Indeed, Anna confessed that the course was “incredibly sociable” but at the same time an environment in which “everyone improved so fast”.

Alexander Dowthwaite, who is studying for a BA in Architecture at Melbourne University, was just as complimentary. For Alexander, the course provided the “essential training” he required to develop the classical tradition back in Australia. Australia has “its own rich classical tradition,” he remarked, but it has “very few classical architects.” He concluded by confirming the course was worth his rather lengthy commute! T’Leya Walker, an MA student of Community Planning, Policy and Design from South Carolina, was another attendee. For T’Leya, the course was an opportunity for self growth and in specific areas of relevance to her background in planning. T’Leya spoke fondly of the encouragement she received from the tutors, and stated that the experience had in all regards exceeded her expectations.

The highly practical course also afforded each student the time to contemplate and distill the ideas which they had been taught. Jofrid Sandgren Østenstad, soon to begin the 5th year of her architecture studies at KTH, said the course had helped her to “find the inner confidence to put up a strong case to any critic” of classicism. Prior to attending, Jofrid exclaimed that she had been puzzled about the disdain she had encountered for Classical architecture in the field, and that this had “both confused and saddened” her. The course content equipped Jofrid with a new understanding of classical detail and proportion and the malleable application of this classical language. In the feedback she gave, Jofrid was very optimistic about the future. “Tradition is not something that needs to hold us back,” she said. “This knowledge is how we will continue to evolve, perfect and adapt to new circumstances”. To have reached this point of reflection in a just a month is a wonderful achievement, and it will undoubtedly inform her future career.

Thanks to the Ax:son Johnson foundation and to all the staff involved, this month long course has benefited its now over 100 alumni. It is also something, which Anna claims, you “can only truly understand” if you “live it yourself”. For those interested in participating in next year’s summer school, keep checking the website for this year’s applications, which will open in January.

More information about the course can be found on the INTBAU website here and the Instagram page for the summer school can be found by clicking here.

The full account and feedback from the four attendees is available here.  Meanwhile, the examples below illustrate some of the extraordinarily detailed work undertaken by this year’s students.