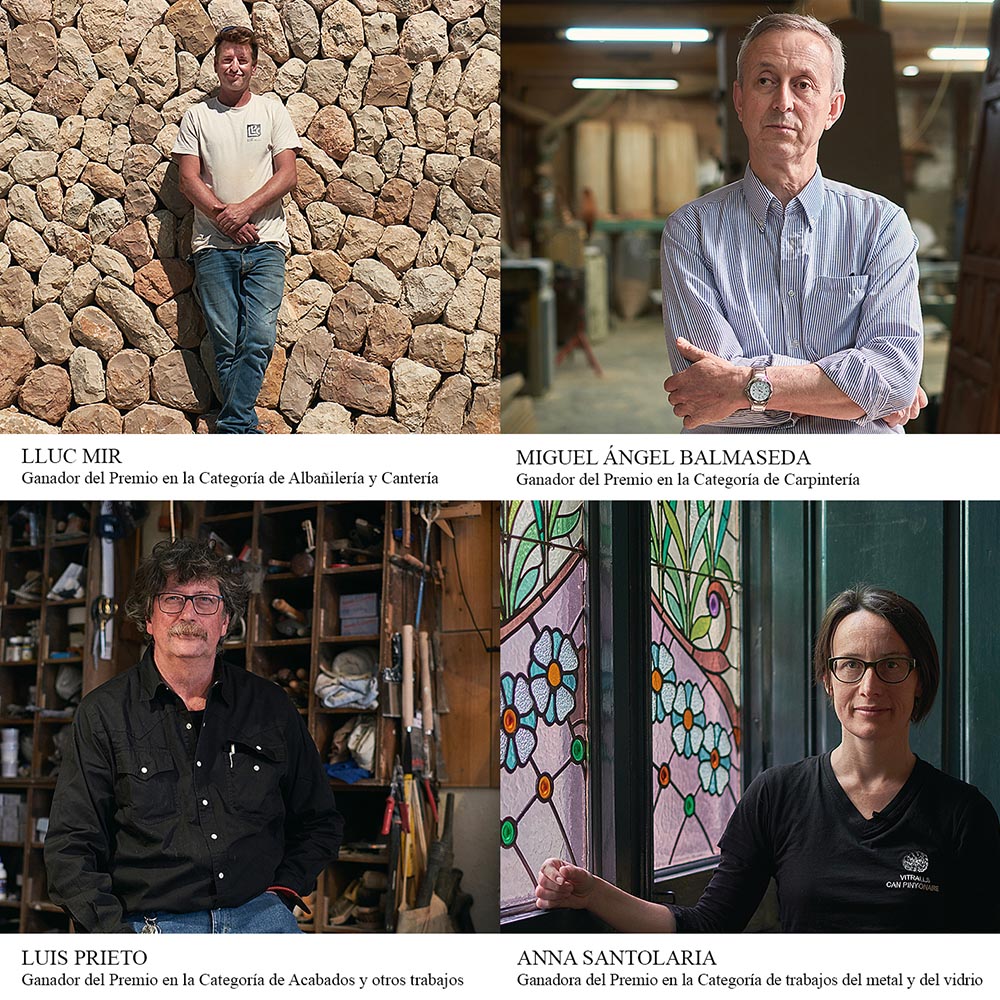 The Richard H. Driehaus Building Arts Awards are awarded in Spain to four exceptional practitioners of traditional building crafts. The awards recognise those who have stood out in preserving and keeping these crafts alive. The annual competition in Spain selects four new artisans each year who are awarded a 10,000€ prize for important contributions to their fields of work.

The purpose of these awards is to promote traditional crafts by using less polluting techniques, promoting local economies (especially relevant in rural areas suffering depopulation), and helping to preserve historic monuments. The initiative is organised by INTBAU, with support from the Richard H. Driehaus Charitable Lead Trust, through a contribution to the Chicago Community Foundation for the Richard H. Driehaus Charitable Fund, with the collaboration of the Department of Building and Architecture of the Ministry of Public Works and Infrastructure, the Department of Fine Arts of the Ministry of Culture and Sports, the Rafael Manzano Prize for New Traditional Architecture and the Council of Architecture Institutes of Spain.

In the glass category, it recognised the work of Anna Santolaria. Anna is the founder of the stained glass workshop Can Pinyonaire in Gerona. She was trained at the universities of Barcelona and York and specialised in the conservation and restoration of stained glass and the creation of new pieces using traditional techniques. Some of her most important stained glass works can be found on Casa Batlló, the Naumburg Cathedral in Germany, the Lichfield and York Cathedrals (UK), the Uppsala Cathedral (Sweden), and the Santa Creus Monastery in Tarragona, among others. For more information about Anna’s work, visit https://youtu.be/rqOzg5FEV2I.

The chosen stone master was Lluc Mir, from Mallorca, who specialises in the construction of the typical dry stone walls of Mallorca. This technique, recently declared an Intangible Cultural Heritage of Mankind by UNESCO, requires great skill to ensure the stability of construction. Due to the fact that it is an incredibly rare and diminishing skill, Lluc co-founded the Gremi de Margers of Mallorca (the Stoneworkers Guild), of which he is also a chair, which seeks to protect and disseminate this essential knowledge to preserve the identity of the area. For more information about Lluc’s work, visit https://youtu.be/eBSGoES3bKU.

Miguel Ángel Balmaseda, from Écija, has been recognised in the wood category. Balmaseda is a carpenter and cabinet maker. Like his ancestors, he specialises in the construction of doors and windows, especially in doors with ‘ear flaps’, typical to Écija. This technique has given a unique identity to the palaces and buildings of the town for centuries. For more information about Miguel’s work, visit https://youtu.be/N95Hdl79zTY.

Luis Prieto from León is the winner in the category of tiling and decorative finishing in traditional construction. Since completing studies in Germany, Belgium and France, he has been dedicated to the production of stuccos with traditional facings, and decorative painting with natural pigments. This is his way of refusing to accept the gradual standardisation of colours used in construction all over the world. Some of his most significant works include Casa del Greco in Toledo, the Museo Romántico in Madrid, the Lázaro Galdiano Museum, the Cerralbo Museum, the Palacio de Justicia in Madrid, the Congreso de los Diputados (House of Parliament), and the Yuste Monastery in Cáceres. For more information about Luis Prieto’s work, visit https://youtu.be/VLKlVX820Lc.

Additionally, the jury selected Luis Prieto as the master of the apprentice who will receive a scholarship of 10,000€ for further training over the next 12 months.

The Building Arts Awards jury is a group of varied and respected practitioners,  including representatives from the various collaborating institutions.

The work of the awarded artisans was part of an exhibition open to the public at the Arquería of the Nuevos Ministerios from 12-29 June.