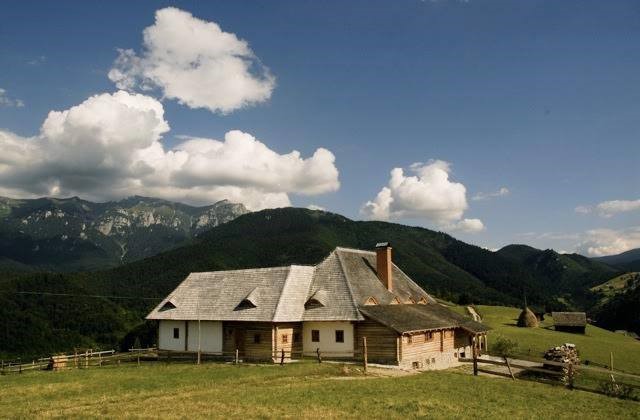 INTBAU Scandinavia invites you to join a one week short course in landscape painting, from 29 August to 5 September 201, with walking tours of the cultural landscape and villages of Transylvania, Romania.

The course tutors will be two of Scandinavia’s foremost figurative and classical painters, Lene Ørnhoft and Christopher Rådlund. Both are based in Oslo and are members of the Frie Kunster (Artes Liberales) centre for traditional arts and architecture in Oslo, an INTBAU Scandinavia partner organisation. Teaching will be in English.

Participation is limited to twelve persons, to ensure one-to-one direction and comment from the tutors. The focus will be on oil painting. Tuition will be adjusted to the individual participant’s previous experience and level of skill. The course is aimed at architects, antiquarians, graphic designers and all those interested in improving their skills in painting.

The tour will be organised and led by INTBAU College of Chapters member Audun Engh, and INTBAU Committee of Honour member, architect Arne Sødal. Since 2003 they have organised annual charrettes and short courses in Transylvania, focusing on cultural heritage preservation and sustainable local development, with funding from the European Union, the Norwegian government, and others.

The uniquely preserved medieval cultural landscapes and villages of the region will be our “classroom”. Several of the villages and medieval towns in the area are UNESCO World Heritage Sites, including Sighisoara. Many buildings and fortified churches have been restored within the last ten years, with the assistance of international NGOs.

Accommodation will be village guesthouses:
– Inn on Balaban, close to Bran
– Zalanpatak, Miclosoara, a farm guest house owned by Prince Charles
– Family-run guesthouses in the village of Malincrav

Information about the tuition, from Christopher Rådlund

We invite you to experience the pastoral idyll of the old Saxon parts of Transylvania, Romania (Siebenbürgen), where you will learn how to paint landscapes in the romantic-classical tradition.

In Transylvania, you will have the chance to experience and study a cultural, agrarian landscape very similar to medieval times – the pre-modern landscape that existed in central Europe until the 18th century.

What could be better than learning how to paint these landscapes in the traditions of artists from Albrecht Dürer to Caspar David Friedrich? The Transylvanian fields and woods, villages and farms offer the perfect scenery for those who want to paint in the romantic-classical manner. This is a pastoral environment which Dürer would have recognised and which Friedrich would have found suitable for his compositions.

You will learn the basic methods of classical landscape painting, as used by the Dutch masters of the 17th century and German romanticists of the early 19th century. We will focus on oil painting, but it will also be possible to paint in acrylic or watercolour.
Canvases, brushes and oil paints will be provided by the organisers (but not watercolour paints and paper). We recommend you bring your own field easel and foldable stool. Both can be bought at art supply stores.

Lene Ørnhoft, born in 1966 in Oslo, was educated at art schools in Oslo. As a student of Norwegian painter Jan Valentin Sæther, she has exhibited her classicist paintings at more than twenty exhibitions in Oslo and other Norwegian cities. Lene is one of the organisers of exhibitions, courses and other public events at the Frie Kunster (Artes Liberales) centre for traditional arts in Oslo.
CV (in Norwegian) http://friekunster.no/www.friekunster.no/Lene.html
Portfolio of paintings www.lene.ws

Christopher Rådlund, born in 1970 in Gothenburg , Sweden, is one of Scandinavia’s leading landscape painters. For the past twenty years he has been based in Oslo, Norway, and since 1999 has been an active member of the movement for figurative painting in Norway. Christopher Rådlund is also a member of INTBAU.
CV (in Norwegian) http://kunstnere.gallerisemmingsen.no/christop/index.php?side=1208355826
Portfolio of paintings http://www.allgronn.org/radlund/ Saturday 29 August: Participants arrive at Sibiu Aorport, Transylvania, on flights booked individually. (Lufthansa and Austrian Airlines). Please contact us about recommended flights and connections to other European cities. Transportation by coach to Bran and the Inn og Balaban guesthouse. Introduction to the short course
Sunday 30 August: first day of the painting course in the hills close to Bran. Afternoon visit to the famous Bran Castle.
Coach to the Zalanpatak guest house, Miclosara.

Saturday 5 September: Coach to Sibiu. tour of the historic city centre. Coach to the Sibiu airport for departures.

The Villages and Towns of Transylvania

The population is a mix of people with Romanian, Hungarian, Saxon and Roma ethic background.
Miclosoara has been populated by a majority of Székelys, a Hungarian-speaking ethnic group.

Malincrav is an old Saxon village.
The Saxons arrived in southeastern Transylvania in the 12th and 13th centuries. They were invited by the Kings of Hungary to defend the eastern borders of Christian Europe against the invaders from the west. They established about two hundred villages, and seven main fortified towns/cities – hence the German name for Transylvania, Siebenbürgen.

Saxon is not a written language and sounds similar to Dutch and the low German dialects of Luxembourg.
The houses were built in the style of their 12-13th century western European origins. The villages have remained unchanged in structure and largely unchanged in size for many centuries. The villages are typically built in line, along each side of a stream.
The spiritual and defensive centre of each Saxon village was the distinctive fortified church. At times of attack, Saxons would retreat with their livestock within the walls of the church, in which stores of food were kept, and which had a well, to allow for a siege.

This is one of Europe’s last medieval landscapes, with probably the most extensive flower-rich grasslands remaining in lowland Europe, essentially unchanged for hundreds of years, in which low intensity agriculture coexists with an abundance of flora and fauna. The landscape still presents a medieval land-use pattern – forested ridges and gullies, pasture and hay meadows on gentler slopes and terraces, and arable land and smaller meadows on the flat valley bottoms near villages.

This kind of landscape has almost entirely disappeared in lowland Europe. This is what makes the area unique: it is perhaps the largest area in lowland Europe with extensive tracts of ancient landscape, intact villages and associated traditional agriculture. Low intensity agriculture coexists with an abundance of flora and fauna, including many nationally and internationally threatened species.

This may be the largest area in lowland Europe with extensive tracts of ancient landscape, intact villages and associated traditional agriculture. Both fauna and flora are outstanding. The area possesses not only Europe’s most extensive non-alpine hay-meadows, with an astonishing diversity of wildflowers, but also the continent’s last lowland bears and wolves.
A man-made, semi-natural landscape.

This low-input farming in a rich natural landscape provides an opportunity to study historical ecology by direct observation – and is increasingly relevant in current economic conditions. In addition to the grassland and forest habitats and species, the villages themselves retain a rich genetic heritage of fruit trees, flowers, herbs, vegetables, and ancient medicinal plants.

Participants should book their own flights to Sibiu, Romania. Sibiu airport has international connections to Germany and other European countries. Please contact us for information about available flights and transfer from Sibiu to Viscri village, approx. one hour by car or train.

The fee includes: – Transportation from Sibiu airport – Seven nights accommodation – All meals – All transportation between villages – Six days teaching of landscape painting, and guided tours of villages and towns. – All course equipment (canvases, brushes and oil paints). We recommend you bring your own field easel, and foldable stool.

Information about the villages

The Zalanpatek farm, owned by Prince Charles, where we will stay three days.
Malincrav

The medieval castle town of Sighisoara.

12 minutes video about the Kalnoky estate in Miclosoara, and the guest house in Zalanpatak, owned by Prince Charles, where we will stay during the short course. An interview with HRH The Prince of Wales about the importance of the Transylvanian cultural heritage and ecology starts at 7 min. 20 sec.

The Heritage and Cultural Landscapes of Transylvania