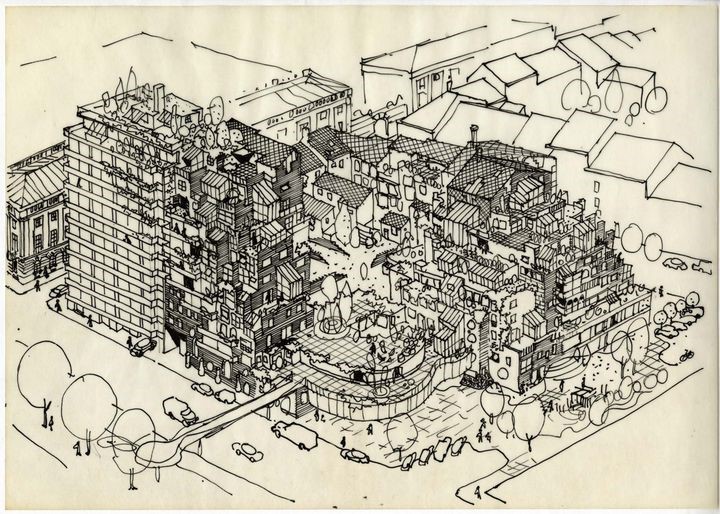 Lucien Kroll (13 March 1927 – 1 August 2022) was a Belgian architect. Born in Brussels, he studied at the National School of La Cambre and went on to found the Atelier d’Architecture Simone & Lucien Kroll, with his wife Simone.

The Krolls are regarded by many as the founders of participatory architecture, a consultative and immersive approach to the design of the built environment. Kroll’s idiosyncratic style, closely tied to the participatory design process, was the antithesis of the modernist movement. In his lifetime he completed more than a hundred projects⁠.

“When I studied in the post-1968 Ecole Nationale Supérieure des Beaux-Arts in Paris, the mood was gloomy; it didn’t appear that architecture as an ‘Art and Crafts’ was at all in the heart of architectural education anymore. The older professors, the ‘Mandarins’ had disappeared or had gone into hiding and most of the younger faculty had just climbed from their revolutionary barricades of May 68 onto the podiums of Academia confronting the crowds of students with lengthy and opaque lectures, often cryptic and impenetrable to us students eager to learn about architecture. I remember vividly Le Corbusier being mentioned condescendingly as ‘Père Corbu’, the absence of drawing and history teaching, and the overwhelming importance of semiotics, semiology, economy, and anthropology. Architectural design, composition and tectonics were mostly left up to the students who were told: “You have to find out by yourselves”. It seemed that there was little or no fun to expect any more fromarchitecture as a discipline!

We had of course been familiarized with Hassan Fathy’s “Architecture for the Poor” (1969), and Bernard Rudofsky’s “Architecture without Architects” (1964) and started haphazardly to learn about Christopher Alexander’s seminal work (A “Pattern Language” (1977), and it seemed after all that all passion and commitment to a humane, beautiful, and popular architecture had not been forgotten about. Aldo Rossi’s extraordinary “Architettura della Città” (1966), and influential “Rational Architecture” exhibition at the 1973 Triennale di Milano, etc., Rob Krier’s “Stadtraum” (1975), and Léon Krier’s “Rational-Architecture-Rationnelle”, and a sudden profusion of excellent design and built work produced by the ‘rationalist’ Tendenza in Italy, Spain, and Switzerland, etc. appeared increasingly in the still opulent architectural magazines and journals. It demonstrated how a new modernity could co-exist harmoniously within the framework of a traditional culture taking inspiration from vernacular architecture as well as from a renewed interest in Classical architecture and urbanism.

Lucien Kroll however became well known and popular through a grassroot activism, community engagement and collective planning and building endeavours rather than through the ideological platforms of both the professional and academic establishments. He transcended the stalemate in both theory and practice, and went beyond purely anthropological, typological-morphological, and social-political aspirations favouring a hands-on ‘participationism’, collaborative, experimental and low-tech building, as well as a synthesis of eco-anarchistic aesthetics and a ‘Genius Loci’ Romanticism. Lucien Kroll became later a pioneer in computer-aided design where he introduced features of accident and irregularity deriving his design algorithms from the irregularity, nonlinearity, and heterogeneity, etc.,which can be found in much of the best examples and world Architecture, as discussed brilliantly, but differently in Roberto Venturi’s “Complexity and Contradiction in Architecture” (1966)

It is thus in one of the most depressed periods of architectural education that Lucien Kroll emerged joyfully with an articulate strategy combining theory and practice with an elegant and wild sense of social and cultural mission, a deep reverence for service, and an admirable and unique empowerment of the inhabitant. Within the effervescence of new patterns, ideas, images, and practical experiences suddenly emerging out of the gloom of post-WWII Modernism and post-CIAM stagnation, Lucien Kroll’s merit has been to bring back the inhabitant into the equation of the building process; he was encompassing the process with its chaos, conflicts, contradictions and celebrating it unashamedly in an aesthetics highlighting a living memory of diversity and complexity within the built world and the community it houses.”